Dhrupad Kashyap of GTC Chess Foundation won the silver Medal (Under 17 age category) at the Commonwealth Chess Championship 2019 that concluded at New Delhi on 7th July 2019 . Dhrupad, a grade IX student of Sarala Birla Gyan Jyoti School Amingaon scored 5 points out of 7 rounds and remained undefeated in the entire tournament. In the final round he drew his game with Grandmaster Erigaisi Arjun of Telengana who emerged champion in the event. Dhrupad by virtue of his excellent performance also gained a total of 66 FIDE Rating from this tournament. Tournament was organised under the aegis of Commonwealth Chess Association at Hotel Leela Ambience, New Delhi from 1st to 7th July 2019. Dhrupad would be representing India at the Malaysian Chess Festival 2019 at Kuala Lumpur, Malaysia from 9th to 19th August 2019. Gauhati Town Club congratulates Dhrupad and wishes him success in future events. 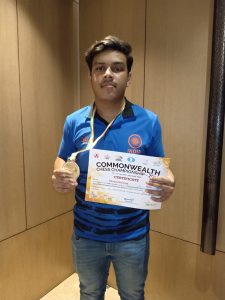 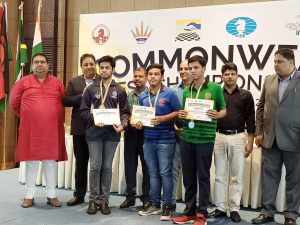